Ask as you may, the idea of having a homeopathic mad hatters party didn’t come from me. Or Sherree or any of the people involved in it. It was more like some wise swirling strangeness that descended and we let it unfold. Though it is true that the idea was sitting there half formed, after the Australian Homeopathic Association conference in Tasmania 2014. At the time we (at the Aurum Project) were already talking about how it would be good to do continuing education in a different format. After all, don’t we soak in concepts and learn better when we are playing? And less if we sit in a lecture room. You don’t have to be seven years old like the wildly curious Alice in Wonderland to know that.

I also know that I understood little about the rabbit’s milk proving when I bought the proving book from the Similimum Homeopathic Pharmacy stand at the Tasmanian conference, which just happened to be beside our Aurum Project stand. (A proving is one type of homeopathic research. It is used to uncover what symptoms a homeopathic medicine can be used to treat. And yes, rabbits milk can be used as a medicine when it is turned into a homeopathic remedy!)

So at least one month after Tasmania, I finally unpacked my bag and found the proving book and took it to bed to read. Out of the proving, jumps the theme of going down a rabbit’s hole into the world of Alice in Wonderland. Following immediately on from that, a patient gave me a present after visiting Disney World and it was a tin of Alice in Wonderland tea, yes, they crazily do sell such a thing.

Listen to the whispers and pay attention to coincidence we are told.

Not too much later, I discovered that there is a book called The Mad Hatters Tea Party[i] by homeopath Melissa Assilem. (Sorry, Melissa I had never heard of the book before). It was published in 2002 and has been reprinted four times. It really is worth reading for a deep understanding of remedies like Thea and Saccharum (tea and sugar).

Then it was pointed out to me that 2015 marks the year when we celebrate 150 years since the writing of Alice’s Adventures in Wonderland. To quote from Alice in the book, “This is impossible.” And the answer back from the mad hatter, “Only if you believe it is.” With so many moments of synchronicity: the idea of a mad homeopaths tea party was set.

In those years since it was  published, the book has taken on a life of its own and has been printed in more than 70 languages. It’s been made into films, video games, and even rides in theme parks. Alice in Wonderland even has a syndrome (AIWS) named after it: is a neurological condition that distorts perception, causing disorientation and a warping of the senses. Little wonder (that’s a pun by the way!) that this children’s story is the third most quoted book in the Western world only after Shakespeare and the Bible.

This can only happen because the characters and the symbolism all through the book rings so true in some deep recess of our brain. Especially, deep in the slightly mad, counter-intuitive world of homeopathic practitioners.

Imagine the curveball, when I discovered in early April that the ideas in the book are in part moulded from homeopathic materia medica. Because of migraines, the author, Charles Dodgson (Lewis Carroll) was a patient of James Compten Burnett, the famous homeopath. So even though Charles was

a mathematics lecturer, he had a great interest in unusual states of consciousness and he immersed himself in homeopathic texts.[ii]

All of these pieces of new information were starting to be delivered not as a whisper but more like a great magic thump of “You’re not going to believe this”.

Here’s the bit that I love: the character of the white rabbit was not derived by Charles from any proving because The Lac Oryctolagus (rabbits milk) proving was conducted in 1997 by Claire Bleakley. Yet the Alice in Wonderland rabbit character is absolutely in line with the proving with all the dithering and “I’m late, I’m late for a very important date”.  Charles and Claire both plugged into information which is there to be accessed by all, whether it be the detective work of the homeopathic proving method in 1997 or the authors zest for archetypical truth in 1865.

The first time I ever heard someone discuss archetypes or homeopathic remedies as a character, was in a discussion on the remedy Mercurius and the mad hatter story came up. Every homeopathic student has loved that story and used it to help learn how to decode the seemingly mad not-what-you-think world of homeopathic provings.

“But I don’t want to go among mad people,” Alice remarked.

As homeopaths sitting in the consult room, we strive to find a remedy capable of healing a little madness. It doesn’t matter whether it is coming out as physical symptoms or emotional symptoms, we do well to allow ourselves and the person sitting with us to just be real. The first part of any healing is deciding that there is a problem. No pretending or happy faces. Really this is one of the great parts of being a homeopath, I can be real, I can say yes I like eating chocolate, and sometimes I get frustrated and sometimes I’m a little mad.

So in the meant-to-be spirit of learning, fun and the benefits of a little madness this fundraising Aurum Project Mad Hatters party is happening on the 2nd May and of course Claire Bleakley (with Rabbits milk information tucked in her brain) said she would hop over the Tasman to join us.

Learning to use homeopathy in the home, written by Lorraine Ellison, Homeopath at the Harbord Homeopathic Clinic

Several times a year at the Harbord Homeopathic Clinic we run first aid talks about learning to use homeopathy in the home. These talks teach you how to use the twenty most commonly needed homeopathic remedies. We hold the talks at our clinic which is located in Brookvale, Sydney not far from Manly or Dee Why. Those who attend seem to love them and the practitioners love them too as it reignites our love for what we do…..

We hope these courses enable you to treat some common ailments yourself. We also hope it will encourage you to enter a fun, ongoing relationship with your family’s ‘dis-ease’ responses by understanding them in a homeopathic framework.
In these courses we also love to hear from you: Grandma’s treatment of a 3am earache; dads declaration that he used Chamomilla with great success for his teething child; the well timed use of a homeopathic dose of Belladonna.

Match the physical with the emotional

Our bodies have to deal with many physical stressors: alcohol, caffeine, sugar, tobacco, chemicals, junk food etc etc. Sometimes these physical stressors lead to emotional upsets: insomnia, irritability, restlessness and more…
When we choose a homeopathic remedy we will be matching the physical with the emotional – as none of these symptoms happen in isolation. We want the whole shooting match!

It is the same with a child at school – they may respond to being in trouble by being angry – possibly by bullying, hitting or biting OR they may respond by “shutting down” and hiding out in the bedroom alone. Two different presentations of anxiety in a school child.

As adults, we may be dealing with migraine, prolonged grief, feeling overwhelmed, irritability. These are times when a visit to your homeopath is essential….. Again, our remedy will match the physical with the emotional.

Sometimes you need the guidance of a trained homeopath

Some of these signs and symptoms can be treated at home and we encourage you to do this but in some cases you will need the guidance and training of a qualified homeopath.

That is why we homeopaths run these courses – firstly to give you the confidence to choose your own remedies and secondly to know when to ask your homeopath for an appointment. For the dates of upcoming talks please click here.

Homeopathy kits are used around the world

There are twenty homeopathic remedies which are commonly used around the world by families, for the treatment of everyday ailments. Despite homeopathy’s impressive popularity in Europe, it is even more popular in India. In these countries many people grow up knowing the names of the remedies Arnica and Chamomilla and know how to use them but if you have only just discovered homeopathy then “you have to start somewhere” and it doesn’t take long to start using them yourself.

Earaches, teething and fevers can all be treated in a gentle, non-invasive and effective way using homeopathy. With a little practice, it is possible for parents to care for their children’s minor upsets themselves.

Come along to our free talk and find out for yourself how you can help support your child’s health naturally.

Lorraine Ellison (homeopath in our clinic) was asked by Charlene Fredman to give a talk at the Explore and Develop early childhood centre at Brookvale. They are located not far from our clinic, at the back of Warringah Mall, on Old Pittwater Road. They are up on the roof of one building and on the ground floor of another building. There is a great outdoor area up there on the roof which you can see in the photo.

Charlene first took over the centre in November 2008 with a vision to create a place where each child’s different needs are met. Charlene encourages family collaboration and doesn’t like a “drop off centre” feeling. She also says “Flexibility is so important because I understand all about how babies are unpredictable, no thanks to sleepless nights, nappy rash, teething etc”. This is where Lorraine’s talk about homeopathy and natural health care for young children was of interest and there were lots of questions from the parents about natural fever management, coughs and colds, runny noses, and remedies for teething.

We are happy to visit your playgroup/ bunch of friends etc for an information chat about how to use remedies in the home. Call the clinic for a suitable time. 02 99059415 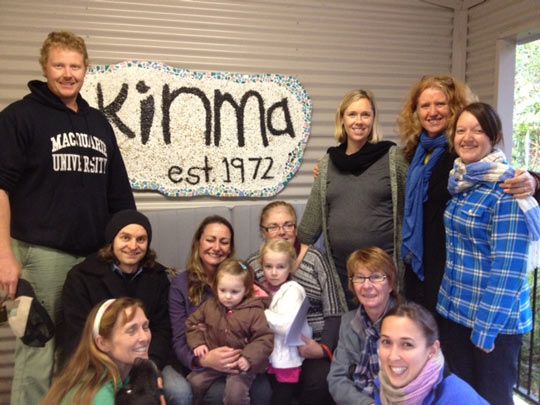 Lorraine Ellison (homeopath in our clinic) was asked to attend the staff development day at Kinma School, in leafy Terrey Hills. Kinma is an independent, alternative school in operation since 1972. At this school, parents are asked, on their enrollment forms, if they are happy with first aid homeopathic remedies to be given in the playground. 90% of parents agree…..

Staff are given an annual update about the use of remedies for falls, stings and bites etc. The homeopathy is given in association with all other first aid measures, if necessary.

We are happy to visit your playgroup/ bunch of friends etc for an information chat about how to use remedies in the home. Call the clinic for a suitable time. 02 99059415