Australia’s most popular antibiotic has long been suspected of being less effective than in the past. How often do we hear of several successive courses of antibiotics being prescribed for symptoms of an infection without improvement. Eventually the immune system fights off the infection, but with little thanks to the antibiotic. Antibiotic resistance is now a mainstream topic and the evidence is mounting that over-use of prescribed antibiotics for viral and relatively minor bacterial infections is to blame.

There is no doubt that there are times when antibiotics are life saving in cases like bacterial pneumonia and meningitis. The dilemma arises when antibiotics are offered for less serious cases, for viral cases, the threat of secondary infections or “just in case”. For some people the initial symptoms are unaffected and are now accompanied by side effects and a vicious cycle of antibiotic over-use builds up.

What is antibiotic resistance?

Until the 1940s, when antibiotics were discovered, people with infections like tuberculosis and pneumonia often died because the available treatments were not very effective. With the discovery of new drugs, the ability to fight diseases improved dramatically but many bugs have become resistant to these drugs. Now, we continue to read news stories about superbugs, bacteria that are increasingly resistant to common antibiotics.

Bacteria can easily adapt to the onslaught of antibiotics by changing themselves and they multiply so fast they go through many generations in just a few hours. The trouble is that the weaker bacteria are usually killed off while the stronger, more resistant ones survive and multiply, and then become resistant. “There may be a time down the road when 80% to 90% of infections will be resistant to all known antibiotics.” (Walter Gilbert, Harvard professor and Noble Laureate.) If you take antibiotics unnecessarily you contribute to the development of antibiotic resistance, a growing global threat. Also, while the resistant bacteria are still alive, you act as a carrier of these germs, and you could pass them to family members. Research on new antibiotic drugs is not expected to appear in the immediate future, so there is a justified fear that bacteria become resistant to all our current antibiotics.

Exposure to drug-resistant bugs happens the same way you get other infections: contaminated food or water; unsafe sexual practices; contact with infected people or animals; contact with contaminated environmental surfaces or during hospital stays. Over one million resistant infections are acquired each year in U.S. hospitals at an estimated financial cost of 4-5 billion dollars (not to mention increased mortality)!

How can I cut down on the use of antibiotics?

The first time you stave off an infection using natural medicine, without the help of antibiotics or other drugs, it can be a challenge. However, allowing your immune system to really work, gives you long term benefits far beyond the recovery from a simple cold or bug. You are less likely to have a recurring illness.

Using antibiotics to treat these infections not only increases the risk of future episodes, but also increases the risk of developing complications, allergies or autoimmune illnesses. In the same way that muscles benefit from use and exercise, the immune system benefits from infectious challenges. These “common” infections provide the exercise, needed to keep the immune system strong.

Natural Medicine to the Rescue

One of the most popular and practical natural ways to combat infections is using food as medicine.  Garlic has been shown to be an effective therapeutic agent for multidrug-resistant bacterial strains and also for food poisoning. Other antibiotic foods include manuka honey, propolis, royal jelly, oregano and probiotics.

And here is one for the guys! The addition of 75g of walnuts to the diet of healthy men improved sperm morphology, motility and vitality.

In a recent randomised trial, published online August 15, 2012. conducted by the University of California, the inclusion of walnuts in the diet of men significantly improved both sperm parameters and serum omega-3 and 6 fatty acid levels. In addition, sex chromosome abnormalities were significantly lower in the walnut group. 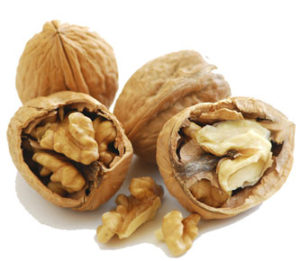 Walnuts for the boys

While this study does not clarify whether similar effects would be applicable to those with fertility issues, it would be safe to assume that adding walnuts to the diet of men planning a pregnancy may also be beneficial for a subset of males with infertility concerns.

Walnuts for the girls

But back to those mice. In a study, reported in Nutrition and Cancer (2011), mice fed a moderate amount of walnuts daily were half as likely to develop breast cancer and among those that did, the tumours were smaller, less numerous and developed at a slower rate. Most significantly, these mice were genetically bred to develop cancer at a higher rate.

So girls, when you are looking for a healthful snack, think nuts and particularly walnuts. Yes, they are high in fat, but instead of swallowing those fish oil capsules to get your omega 3’s, enjoy a handful of walnuts instead. In fact, add a few Brazil nuts in to the mix for extra antioxidant action and your daily selenium fix. Read more.

Six hours of bushwalking has a powerful immune boosting effect according to Japanese research. They actually found that communing with nature, increased cancer fighting natural killer cells. They also found that bushwalking is a natural stress reliever, helping alleviate depression and anxiety as well as decreasing blood pressure.

The leading researcher, Yoshifumi Miyazaki, found that the stress hormone cortisol was 13.4% lower in those who gazed on forest scenery for 20 minutes than in people who stayed in the city. Maybe the scenery on the computer screen doesn’t count!

Another study, in which people spent two nights at a hotel in the country and went bushwalking for three leisurely strolls while they were there, showed that the cancer-fighting part of their immune system increased.

The author of the study, Li Qing of  Tokyo’s Nippon Medical School, also noted that the increase could still be observed 30 days later.

The old fashioned advice of “get some fresh air” turns out to be good advice. It’s a combination of the smell of the trees, listening to the birds, and the feel of sunshine through the leaves. They all have a calming effect, says Miyazaki. After all, he points out, humans lived in nature for several million years. “We were made to fit a natural environment, so we feel stress in an urban area.” Miyazaki believes that ”when we are exposed to nature, our bodies go back to the way they should be.”

The research has been called Forest Therapy and is being embraced by governments and citizens alike. In 2006, a government-affiliated organization began designating certain forests ‘Forest Therapy bases.’

Forest Therapy bases are maintained by local governments. At some of them, visitors can take a guided walk with experts on forests and health care. At one base, medical checkups among the cypress trees are offered to visitors for free every Thursday. And some companies are even including forest therapy in their employee health care programs. Li Qing believes that in a few years, a forest therapy program will be developed to help patients whose immune systems have been compromised.

It seems obvious that bushwalking  promotes well-being, but it’s also great that research is being done on such a free-of-side-effects therapy. With concrete evidence of bushwalking having an immune boosting effect, the enormous value of our forests may be appreciated by more people.

Honey is more effective than placebo in controlling nighttime coughs in children with upper respiratory infections according to a recent study. This is great news especially since pharmaceutical cough medicines were found to be no better than placebo some years ago.*

Honey has the added benefit of having antibacterial properties, and it tastes good too. The World Health Organisation also recommends honey for coughing in young children with URIs.

In a recent randomized placebo-controlled double blind trial (RCT – the gold standard for evidence based medicine) published online in Pediatrics, children 1 to 5 yrs old were given 10g of a honey (3 different honeys were used, all to great effect) before bed and parents reported on cough frequency, severity and effect on sleep for all concerned. Honey came up tops for everyone.

* Australia’s Therapeutic Goods Administration advised that cough medicines containing antihistamines, decongestants, antitussins and expectorants show little or no benefit over placebo, and may be potentially dangerous to young children under the age of 2.